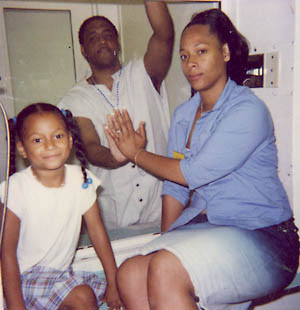 Here is the action alert from Amnesty International:

Kenneth Foster is scheduled to be executed in Texas on 30 August. He was
sentenced to death in 1997 for the murder of Michael LaHood, a white man, in
1996. Mauriceo Brown, the person who shot LaHood, was executed in 2006.
Kenneth Foster, in a car some 30 metres from the crime when it was
committed, was convicted under the ³law of parties², the 1974 Texas law
under which the distinction between principal actor and accomplice in a
crime is abolished and each may be held equally culpable. Kenneth Foster
maintains that he did not know that Brown would either rob or kill Michael
LaHood. There is evidence not heard at trial that the murder was an
unplanned act committed by Mauriceo Brown, as the latter himself claimed.

On the evening of 14 August 1996, Mauriceo Brown, DeWayne Dillard, Julius
Steen and Kenneth Foster drove around San Antonio in Foster¹s grandfather¹s
rental car, with Foster driving. They committed two armed robberies, with
Steen and Brown robbing at gunpoint first a woman and then a man and two
women. Then, in the early hours of 15 August, they stopped outside the house
of Michael LaHood to which LaHood and a female companion, Mary Patrick, were
returning. According to the trial evidence, Mary Patrick approached Foster¹s
car and asked who they were. When she realized she did not know the
occupants, she walked back towards Michael LaHood. Mauriceo Brown got out of
the car, approached LaHood, demanded his wallet, and shot him. Not long
afterwards, Kenneth Foster and his three companions were stopped by police
and arrested. Kenneth Foster, who was aged 19 at the time, gave police a
statement in which he said that, ³Mauriceo jumped out of the carŠWe had
tried to get Mauriceo to get in the car and leave... We just wanted to
leaveŠ I heard a gunshotŠI did not know, at the time, that Mauriceo had a
gun. Mauriceo trotted back to the carŠ He was gasping... I asked him, what
happened, what had he done. He didn¹t reply².

Mauriceo Brown and Kenneth Foster were tried jointly for capital murder.
Brown admitted being the gunman but denied intent to kill. At the trial
Brown testified that there had been no discussion of robbing LaHood before
he got out of the car. Foster pleaded not guilty. Both were sentenced to
death. Mauriceo Brown was executed on 19 July 2006. Neither Julius Steen nor
DeWayne Dillard was prosecuted for the LaHood murder.

To convict Kenneth Foster of capital murder under the law of parties, the
prosecution had to prove that there was a conspiracy between him and Brown
to rob LaHood, and that Foster should have anticipated that murder might
have occurred during the robbery. The prosecution¹s key witness was Julius
Steen. Although Steen testified that he had not been sure of Brown¹s intent
when he left the car and that there had been no discussion in the car about
committing a robbery, he said that ³it was kind of like, I guess understood
what was probably fixing to go down.² Asked by the prosecutor if he had
understood that when Brown got out of the car, there was going to be a
robbery, Steen testified that ³I would say I kind of thought it². He also
said that he was not sure of Foster¹s understanding in this regard.
Affirming the death sentence in 1999, the Texas Court of Criminal Appeals
observed that the case against Foster ³rested largely on Steen¹s testimony
as an accomplice². The prosecution had pointed to the two earlier robberies
committed at gunpoint as a reason Foster should have anticipated that a
murder could have occurred.

Neither Julius Steen nor DeWayne Dillard (who did not testify at the trial)
was interviewed by Kenneth Foster¹s trial lawyers. This was because each was
facing charges in other cases, and their own lawyers refused to allow them
to be interviewed while those cases were still pending. Since the trial,
both have given statements. Dillard testified at a state appeal that before
the shooting, Kenneth Foster had told him that he wanted Brown and Steen to
stop committing the robberies, and because Dillard had known the two longer,
asked him to persuade them to stop. Dillard testified that he himself had
believed there would be no more robberies because he had taken his gun back
after the two earlier crimes. He said that the four were heading back to his
home when they came to a dead end and, after turning the car around, had
stopped when they saw Mary Patrick apparently flagging them down. Dillard
testified that Brown had grabbed the gun but that Foster was unlikely to
have seen that; that there was no agreement or plan to rob anyone; and that
no one had encouraged Brown to do what he did. He said that after the shot
was heard, Foster had appeared surprised and panicked and started to drive
away, but Dillard had told him to stop and wait for Brown.

Julius Steen signed an affidavit in 2003 clarifying his trial testimony,
clarification that had not been elicited by the defence because their
cross-examination was inevitably weak due to their lack of pre-trial contact
with this witness. Steen recalled that it was only when he had seen Mauriceo
Brown standing opposite Michael LaHood that he understood ³what might be
going down. At that point, and not before, I thought that Brown might be
robbing the man². He stated that ³There was no agreement that I am aware of
for Brown to commit a robbery at the LaHood residence. I do not believe that
Foster and Brown ever agreed to commit a robbery. In my opinion, I don¹t
think that Foster thought that Brown was going to commit a robbery. When
Brown got back in the car, we were all shocked. Even Brown looked shocked. I
don¹t think that Brown knew why he shot the man and was surprised that he
did². In a recent appeal, Foster¹s lawyer has argued: ³Foster clearly did
not anticipate what Brown himself did not foresee. Brown clearly acted on
his own independent impulse, and not pursuant to the imaginary robbery
conspiracy that has trapped Kenneth Foster on death row².

In 2005, a federal district judge found a ³fundamental constitutional defect
in Foster¹s sentence². In 1982, the US Supreme Court had ruled in Enmund v.
Florida ­ in the case of a man who had been in a parked car while his
accomplices committed robbery and murder in a house nearby ­ that the death
penalty is disproportionate if it is imposed on a defendant who did not
himself kill, attempt to kill, or intend to kill the victim. The Court
modified this rule five years later in Tison v. Arizona when it held that a
defendant who participates in a crime that leads to murder and whose ³mental
state is one of reckless indifference to the value of human life² may be
sentenced to death. The federal judge ruled that Foster¹s jury had not been
asked to determine if he had any intent to kill LaHood, and that this
failure represented a misapplication of the law. However, Texas appealed to
the Fifth Circuit Court of Appeals, which overturned the decision.

Since the USA resumed executions in 1977, 1,089 prisoners have been put to
death; 398 of them in Texas. There have been 32 executions in the USA in
2007, 19 of them in Texas. The UN Safeguards Guaranteeing Protection of the
Rights of those facing the Death Penalty state that ³capital punishment may
be imposed only when the guilt of the person charged is based upon clear and
convincing evidence leaving no room for an alternative explanation of the
facts². The fact is that Kenneth Foster did not kill Michael LaHood, and
there is compelling evidence that he did not plan, intend or anticipate that
he would be robbed or killed either.

RECOMMENDED ACTION: Please send appeals to arrive as quickly as possible, in
English or your own language, in your own words (please include Kenneth
Foster¹s inmate number, #999232):
- expressing sympathy for the family of Michael LaHood, and explaining that
you are not seeking to excuse the manner of his death or to downplay the
suffering it will have caused;
- noting that the person who actually shot Michael LaHood, Mauriceo Brown,
was executed last year;
- expressing concern at the use of the law of parties in this case, noting
evidence that the shooting was the spontaneous act of Mauriceo Brown, and
that all those involved in the crime have said that there was no conspiracy
to rob Michael LaHood, which would make Kenneth Foster innocent of capital
murder;
- noting that the two other accomplices in the car were never prosecuted in
this crime, and yet as the evidence stands today their and Foster¹s
culpability in it would appear to be similar or the same;
- calling for Kenneth Foster to be granted clemency.

There seems to be some confusion about the law of parties. A criminal has to do a lot more than just being there.

Under the law of parties, a person is criminally responsible as a party to an offense committed by the conduct of another if the person acts with an intent to promote or assist in the commission of the offense, and solicits, encourages, directs, aids, or attempts to aid another person to commit the offense. Tex.Pen.Code Ann. § 7.02(a)(2)(Vernon 2003). In evaluating whether a defendant is a party to an offense, the court may examine the events occurring before, during, or after the offense is committed and may rely on the defendant's actions showing an understanding and common design to commit the offense. See Marable v. State, 85 S.W.3d 287, 293 (Tex.Crim.App.2002). Mere presence at the scene of a crime does not implicate an individual as a party. However, participation in a criminal offense may be inferred from the circumstances. Beardsley v. State, 738 S.W.2d 681, 684 (Tex.Crim.App.1987). Circumstantial evidence alone may be sufficient to show that an individual is a party to an offense. See Miranda v. State, 813 S.W.2d 724, 732 (Tex.App. San Antonio 1991, pet. ref'd).