Stop the execution of Troy Davis, an innocent man 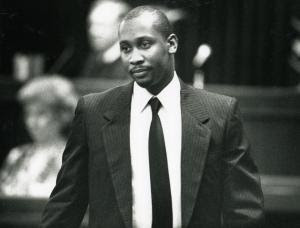 Stop the execution of Troy Davis, an innocent man

By: Ian Thompson, Party for Socialism and Liberation

"The execution of an innocent man is not unconstitutional,

This sad, but very real irony correctly characterizes the racist death
penalty in the United States. Facing execution on July 17, Davis may become
the next victim of the system.

Davis, a 38-year-old African American, was convicted in 1991 of killing a
police officer in Savannah, Ga. Since then, he has suffered on death row.

Davis has always professed his innocence. Now, seven of the nine original
witnesses who implicated Davis have recounted or contradicted their
testimony. Many have said that the police forced them to testify against
Davis.

One of the two remaining witnesses is a principal suspect. Sylvester "Red"
Coles was the first witness to go to police after the shooting and finger
Davis. But nine witnesses have implicated Coles as MacPhail's shooter.

At Davis's trial, the prosecution vigorously pursued the death penalty
despite the mountain of evidence contradicting its case. In a posting on his
defense committee's official website, Davis described the government's
mindset: "The prosecutor has always said he would accept nothing less than
"death" for me, and even when a witness came forward during trial and
admitted perjury, she was detained and threatened, and therefore the jury
never heard her true testimony until years after my conviction and she was a
key eye witness." (TroyAnthonyDavis.org)

Davis's innocence should be easy to prove or at least discuss in a court
hearing, right? Not in the deeply unequal U.S. criminal "justice" system.

In Georgia, death row inmates must overcome more legal hurdles than in other
states. Georgia, like its Deep South neighbor Alabama, does not guarantee
death row prisoners counsel for appeals.

Because Davis lacked the resources to hire a private attorney, his initial
appeals' representation was insufficient. The Georgia Resource Center
handled his first state habeas corpus petition. The center's budget was
slashed in 1995 by the federal government. One of Davis's former attorneys
said, "The lack of adequate resources and the numerous intervening crises"
made effective representation impossible.

After that, courts denied Davis's appeals on purely procedural grounds,
saying that evidence of police coercion of witnesses should have been raised
earlier.

The legal system does not want to get to the truth. It is stacked against
Davis and all working-class people, especially African Americans.
Institutional racism is part and parcel of the death penalty in the United
States.

Advocates of "law and order" excessively cite capital punishment as a crime
deterrent. But, in essence, the death penalty is little more than legal
lynching by the state in this country.

Lynching-including the torture, killing and mutilation of Black people-was
common especially in the post-Reconstruction South following the Civil War
and right up through the mass civil rights movement of the 1950s and 60s as
a method of terrorizing the population and quelling agitation for equality.

A 2006 report sponsored by the American Bar Association cited racism in
capital sentencing as one reason to impose a moratorium on Georgia
executions. People in Georgia are 4.5 times more likely to be sentenced to
death for killing whites as those convicted of killing Black people.

Moreover, high costs and labyrinthine tunnels of legal bureaucracy make
navigating the system nearly impossible for the working class. Further
obstacles have been codified by states and the federal government in recent
decades.

The 1996 Anti-Terrorism and Effective Death Penalty Act, signed by
then-president Bill Clinton has given Davis and thousands of others fewer
chances to appeal their convictions and present evidence that could prove
them innocent. The repressive law allows appeals only in very narrow
circumstances.

'He doesn't deserve to die'

Davis's conviction has taken an unbelievable toll on his family and friends,
although they also have fought hard against his unjust imprisonment and
built a movement to free him.

Martina Correia, Davis's sister and a long-time advocate for his freedom,
told PSLweb.org, "With Troy there, it is like our entire family has been on
death row for years. Nobody understands the hurt that we feel. The
authorities want to kill our brother out of vengeance. But people need to
take an objective look at his case.

She continued, "Troy is an amazing person. You can ask anybody questions
about him in our neighborhood and nobody will say anything negative. He's
been on death row for nearly 17 years and even the prisons can't tell you
anything negative. Troy is a good man. He doesn't deserve to die."

Georgia's state parole board will hear an appeal for clemency from Davis's
lawyers on July 16, the day before his scheduled execution.

The struggle to free Davis has reached a critical moment. Activists and all
progressives should demand an immediate reprieve for Davis and, ultimately,
his unconditional freedom. His case is part of the overall struggle against
the racist death penalty. Abolishing the death penalty would take away one
of the main tools of terror used to hold down African Americans and the
working class as a whole under capitalism.

Corriera said to PSLweb.org, "I'm truly optimistic about Troy's case. I've
been doing this since Troy was convicted and even before. We just want to
have the truth told and have justice for Troy."

Take action to save Troy Davis at http://www.troyanthonydavis.org/.

Source : Party for Socialism and Liberation

It is tme to appeal to Governor Sonny Purdue to commute the death sentence of Troy Davis.

His faioure to do so will result in a 21st century lynching of a man whose "guilt" has been repudiatesd by tetimony recantations of seven of the nine witnesses who testified against him, in addition to the fact that a weapon, linked to the crime chargd, was never found.

Mr. Dav id has not been afforded the "equal protection of the laws, guaranteed him by the Fourteenth Amendment to the United States Constitution.

The Supreme Court failed when it decided aganst hearing the case on appeal, stating that innocence means nothing as long as there was a fair trial. They are supposed to be constitutional scholars, but are, in fact, political pawns for those by whom they were apponted.

If Troy Davis were white-skinned, the seven recanted testimonies would have had meaning. We are not what we claim to be in this cuntry, and we have yet to overcome the undercurrent of bias and hatred that pervades out society.

Governor Purdue should not wait until the last minute to commute the death sentence. Once that is donje there can be a new tria, and perhaps even a trial against those who forced false testimony from 7 witnesses.