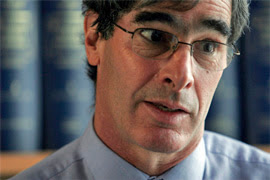 Doctor who devised three-drug method says changes should be made

The three-drug method using sodium pentothal, pancuronium bromide and potassium chloride to perform executions, which will be used for South Dakota inmate Elijah Page's execution next week, has come under attack in several other states for being inhumane and allowing too much room for error.

Ohio and California are two of those states.

As of Jan. 1, there were 191 inmates on Ohio's death row, at least 15 of whom are now plaintiffs in Cooey v. Taft, which challenges the constitutionality of Ohio's lethal injection procedures.

Six more death row inmates in Ohio joined Cooey v. Taft after the May 24 execution of Christopher Newton, 37. It took the guards performing that execution more than 90 minutes to find Newton's veins, and Newton did not die until 16 minutes after the drugs were administered.

Both Newton and Carter were given the death penalty for murdering cellmates, Newton in 2001 and Carter in 1989.

Earlier this week, the mother of Joseph Clark, an Ohio inmate executed in May 2006, sued the head of Ohio's prisons, saying the way her son was executed amounted to cruel and unusual punishment.

It took almost 90 minutes to execute Clark, 57, who was sentenced to death in November 1984 for killing a gas station attendant.

During the first injection attempt, Clark said, "It don't work," as the execution team attempted to inject the first intravenous line.

During the second injection attempt, he said, "Can you just give me something by mouth" to end this?

Executions are supposed to last about 20 minutes.

Texas still ranks first in the number of executions despite ranking third with number of inmates on death row, with about 400.

California death-row inmate Michael Morales, 49, was scheduled to be executed Feb. 21 for the 1981 rape and strangulation murder of 17-year-old Terri Lynn Winchell.

That execution has been stayed indefinitely, and in May, the state of California released a report proposing revisions to that state's lethal-injection process.

Those five deficiencies cited were:

* A lack of meaningful training, supervision and oversight of that team.

* Improper mixing, preparation and administration of the first drug (the anesthetic).

The state of California's report addressed those five deficiencies, and that report awaits legislative action.

On July 1, South Dakota joined the majority of states, when legislation went into effect to specify that a three-drug combination will be used in all executions, including Page's next week.

Of the 36 states with the death penalty, 27 specifically use a three-drug combination.

States that do not have specified lethal-injection procedures are Kansas, Kentucky, Nevada, New Hampshire, Pennsylvania, South Carolina and Virginia. New Jersey specifies only using the first two drugs, without the one that induces cardiac arrest, and North Carolina uses a three-drug combination despite a law specifying the use of two.

Critics of the anesthetic used, sodium pentothal, say it does not completely anesthetize all inmates.

If the prisoner is not completely unconscious, critics say he may be able to feel the asphyxiation caused by the second drug, pancuronium bromide, but will likely be unable to cry out in pain.

The doctor who designed the three-drug lethal injection criticized it in an interview with CNN earlier this year.

That doctor, Jay Chapman, formulated the three-drug concoction in the 1970s. He told CNN that he now believes some changes should be made.

He said there are drugs available now that were not available in the 1970s and could be used to revamp lethal injection.

He said he would recommend keeping the third drug, potassium chloride, which stops the heart, but would take a look at changing the first two: the anesthetic and the paralytic agent.

Chapman told CNN that another problem with lethal injection is that those administering it are not trained professionals because ethical oaths prevent medical professionals from participating in executions. As a result, needles often are not properly inserted into an inmate's veins, or administrators take a long time finding a vein, prolonging the execution, such as in Newton's case.