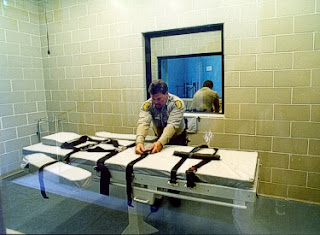 TAMPA, Fla. (AP) — Intravenous lines were properly placed in the veins of a death row inmate and were not to blame for his botched execution in December, a medical professional who monitored his death said Monday.

Testifying anonymously by phone before the Governor's Commission on Administration of Lethal Injection, the man said the IV lines were always in place during the process and were not responsible for the difficulty in pushing the fatal drugs into Angel Nieves Diaz's system.

The medical professional's qualifications were not disclosed. State law protects the anonymity of executioners and anyone involved with a lethal injection.

"At no time was there any evidence to suggest infiltration (of the veins) or compromise of the IV line," the man told the commission, which is examining whether improvements can be made to how lethal injections are administered.

The medical professional rebutted doctors' claims that the IV needles had been pushed through his veins into soft tissue, delaying the flow of chemicals into his bloodstream and possibly causing pain. Asked to explain why an autopsy indicated that IV lines had passed into the soft tissue, the medical witness suggested it could have happened while Diaz's body was being moved after his death.

An investigation found that when the drugs became hard to push into the vein in Diaz's left arm, the medical team switched the drugs to the IV line in his right arm, only to finish in his left arm.

Diaz's execution took 34 minutes — twice as long as usual — and required a rare second dose of lethal chemicals. Some witnesses reported Diaz appeared to grimace as the execution dragged on, but prison employees inside the execution chamber have disputed the claim.

Florida, like many states, uses a deadly mix of chemicals that first sedates condemned inmates, then paralyzes them and finally stops their heart.

Experts who have testified before the commission said there is no way to definitely tell whether Diaz was properly sedated.

Diaz, 55, was sentenced to death for killing a Miami bar manager 27 years ago. He had proclaimed his innocence.

After Diaz's death, then-Gov. Jeb Bush halted executions and created the commission, which will meet for the final time Saturday. Its report is due to be sent to Gov. Charlie Crist by March 1.

Posted by Turid Sandberg Ihle at 08:24