No Training Required For Executioner 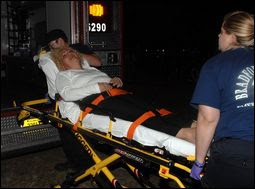 No Training Required For Executioner

Skip directly to the full story.

By KEVIN BEGOS The Tampa Tribune

TALLAHASSEE - The executioners who inject chemicals into a condemned inmate's arm aren't required to have training, certification or any qualifications other than being at least 18 years old, according to Florida's interpretation of lethal injection guidelines.

Yet true medical training to administer chemicals intravenously takes many years, said David Varlotta, a Tampa anesthesiologist who is on the committee reviewing the botched execution of Angel Diaz in December.

Former Gov. Jeb Bush put the death penalty on hold in December after Diaz took 34 minutes to die because the lethal chemicals missed his veins.

The Tampa Tribune obtained a copy of the state's nine-page execution guideline, signed by Corrections Secretary James McDonough on Aug. 16, under public records laws. It makes a distinction between members of the "execution team" who first insert IV lines and the actual executioners.

But that doesn't include the actual executioners, whose participation in previous executions qualifies as training, corrections officials say.

Last week, Diaz's main executioner told a review committee that he had "no medical training and no qualifications" and that he last received lethal injection training about seven years ago. The executioner testified by phone in what sounded like a muffled male voice to guard his identity.

Department of Corrections spokeswoman Gretl Plessinger said the executioner was "current in his skills." The prison had done three executions in the previous three months. Florida State Prison Warden Randall Bryant is confident the executioner had adequate training, officials said.

Questions are being raised across the nation about the training and guidelines that govern executions.

North Carolina officials approved changes to that state's execution protocol last week, suggesting that a physician monitor "the essential body functions of the condemned inmate" and notify the warden if the inmate shows signs of "undue pain and suffering."

But the state medical board has threatened to punish any doctor who takes an active role in an execution.

After the Diaz execution, Florida corrections officials said he suffered from liver disease and was unable to quickly metabolize the drugs.

It's not clear how officials made that determination. Execution guidelines don't call for the inmate to be given a full medical exam before being put to death.

Members of the execution team - not doctors - make "a limited physical examination of the inmate" to see whether any medical issues might interfere with the lethal injection process, the procedures state. Then they make an oral report to the warden.

Corrections officials said that process is adequate because the exam basically is to ensure that they will have access to veins.

Diaz's liver function was not a factor in the botched execution, anesthesiologist Nicholas Gravenstein testified Friday to the committee reviewing his death.

The initial Department of Corrections investigation of the Diaz case found that the two executioners present didn't follow guidelines when there were signs of trouble.

Because the veins were missed, at one point the lead executioner met so much resistance that he no longer could push chemicals through the syringe. The secondary executioner joined in the process without anyone stopping to make an assessment of the problem, as required.

Diaz, 55, was sentenced to death for killing a Miami topless-bar manager 27 years ago. He proclaimed his innocence to the end.

They Must Be At Least 18, 'Fully Capable'

Varlotta questioned how executioners can get proper training. Major medical organizations have ruled that it violates ethics guidelines for a doctor to assist, he said.

"How are they going to get that training?" Varlotta asked. "You would have to get that advice from somebody who's willing to step outside of whatever medical organization they're affiliated with."

In Florida's guidelines, the only standards for the two executioners are that they be 18 or older and deemed by the warden "fully capable of performing the designated functions."

"Nobody really knows who writes these protocols," Varlotta said.

Mark Heath, an anesthesiologist at Columbia University Medical Center, on Monday told the review committee that "lethal injection is a very complicated way of killing people. These drugs should only be administered by trained and experienced medical specialists."

"Mr. Diaz, in my opinion, was not properly anesthetized when the pancuronium and potassium were delivered to his system," said Heath, who has studied lethal injection cases across the nation.

Information from The Associated Press was used in this report. Reporter Kevin Begos can be reached at (850) 222-8382 or kbegos@tampatrib.com. Keyword: Execute, to read Florida's lethal injection guidelines.