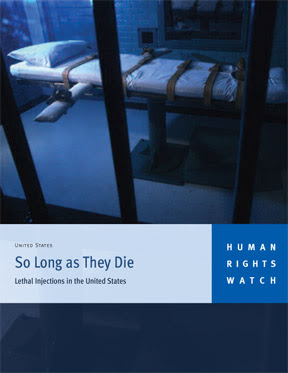 "Florida has executed 59 inmates since 1979." (The Associated Press Posted April 5 2005) Following is a list of 59 inmates executed since Florida resumed executions in 1979:

1. John Spenkelink, 30, executed May 25, 1979, for the murder of traveling companion Joe Szymankiewicz in a Tallahassee hotel room.

5. James Adams, 47, died in the electric chair on May 10, 1984, for beating Fort Pierce millionaire rancher Edgar Brown to death with a fire poker during a 1973 robbery attempt.

20. Theodore Robert Bundy, 42, executed Jan. 24, 1989, for the rape and murder of 12-year-old Kimberly Leach of Lake City at the end of a cross-country killing spree. Leach was kidnapped Feb. 9, 1978, and her body was found three months later some 32 miles west of Lake City.

28. Nollie Lee Martin, 43, executed May 12, 1992, for the 1977 murder of a 19-year-old George Washington University student, who was working at a Delray Beach convenience store.

32. Michael Alan Durocher, 33, executed Aug. 25, 1993, for the 1983 murders of his girlfriend, Grace Reed, her daughter, Candice, and his 6-month-old son Joshua in Clay County. Durocher also convicted in two other killings.

37. John Earl Bush, 38, executed Oct. 21, 1996, for the 1982 slaying of Francis Slater, an heir to the Envinrude outboard motor fortune. Slater was working in a Stuart convenience store when she was kidnapped and murdered.

39. Pedro Medina, 39, executed March 25, 1997, for the 1982 slaying of his neighbor Dorothy James, 52, in Orlando. Medina was the first Cuban who came to Florida in the Mariel boat lift to be executed in Florida. During his execution, flames burst from behind the mask over his face, delaying Florida executions for almost a year.

44. Allen Lee ``Tiny'' Davis, 54, executed in a new electric chair on July 8, 1999, for the May 11, 1982, slayings of Jacksonville resident Nancy Weiler and her daughters, Kristina and Katherine. Bleeding from Davis' nose prompted continued examination of effectiveness of electrocution and the switch to lethal injection.

45. Terry M. Sims, 58, became the first Florida inmate to be executed by injection on Feb. 23, 2000. Sims died for the 1977 slaying of a volunteer deputy sheriff in a central Florida robbery.

46. Anthony Bryan, 40, died from lethal injection Feb. 24, 2000, for the 1983 slaying of George Wilson, 60, a night watchman abducted from his job at a seafood wholesaler in Pascagoula, Miss., and killed in Florida.

47. Bennie Demps, 49, died from lethal injection June 7, 2000, for the 1976 murder of another prison inmate, Alfred Sturgis. Demps spent 29 years on death row before he was executed.

48. Thomas Provenzano, 51, died from lethal injection on June 21, 2000, for a 1984 shooting at the Orange County courthouse in Orlando. Provenzano was sentenced to death for the murder of William ``Arnie'' Wilkerson, 60.

49. Dan Patrick Hauser, 30, died from lethal injection on Aug. 25, 2000, for the 1995 murder of Melanie Rodrigues, a waitress and dancer in Destin. Hauser dropped all his legal appeals.

50. Edward Castro, died from lethal injection on Dec. 7, 2000, for the 1987 choking and stabbing death of 56-year-old Austin Carter Scott, who was lured to Castro's efficiency apartment in Ocala by the promise of Old Milwaukee beer. Castro dropped all his appeals.

51. Robert Glock, 39 died from lethal injection on Jan. 11, 2001, for the kidnapping murder of a Sharilyn Ritchie, a teacher in Manatee County. She was kidnapped outside a Bradenton shopping mall and taken to an orange grove in Pasco County, where she was robbed and killed. Glock's co-defendant Robert Puiatti remains on death row.

52. Rigoberto Sanchez-Velasco, 43, died of lethal injection on Oct. 2, 2002, after dropping appeals from his conviction in the December 1986 rape-slaying of 11-year-old Katixa ``Kathy'' Ecenarro in Hialeah. Sanchez-Velasco also killed two fellow inmates while on death row.

53. Aileen Wuornos, 46, died from lethal injection on Oct. 9, 2002, after dropping appeals for deaths of six men along central Florida highways.

55. Amos King, 48, executed by lethal inection for the March 18, 1977 slaying of 68-year-old Natalie Brady in her Tarpon Spring home. King was a work-release inmate in a nearby prison.

56. Newton Slawson, 48, executed by lethal injection for the April 11, 1989 slaying of four members of a Tampa family. Slawson was convicted in the shooting deaths of Gerald and Peggy Wood, who was 8 1/2 months pregnant, and their two young children, Glendon, 3, and Jennifer, 4. Slawson sliced Peggy Wood's body with a knife and pulled out her fetus, which had two gunshot wounds and multiple cuts.

57. Paul Hill, 49, executed for the July 29, 1994, shooting deaths of Dr. John Bayard Britton and his bodyguard, retired Air Force Lt. Col. James Herman Barrett, and the wounding of Barrett's wife outside the Ladies Center in Pensacola.

58. Johnny Robinson, died by lethal injection on Feb. 4, 2004, for the Aug. 12, 1985 slaying of Beverly St. George was traveling from Plant City to Virginia in August 1985 when her car broke down on Interstate 95, south of St. Augustine. He abducted her at gunpoint, took her to a cemetery, raped her and killed her.

60. Glen Ocha, 47, was execited by injection April 5, 2005, for the October, 1999, strangulation of 28-year-old convenience store employee Carol Skjerva, who had driven him to his Osceola County home and had sex with him. He had dropped all appeals.

FL needs to execute more than two death row inmates a year!! How about one a month!

Why does the ACLU think they need to be involved in capital punishment cases?No one's civil liberties are being violated!If you murder someone in the great state of Florida,you know that the death penalty is a real possibility.What about the rights and liberties of the victims and their devastated families.

Who is the youngest executed person in the history of Florida ?

I just read this online at: http://www.dc.state.fl.us/oth/deathrow/

Hi This is Customdockdavit Here

I read your Blog this is very nice we can get the best deal here:-Boat Lifts Florida ,Boat Lifs Florida,Marine contractors.

The executed ones lived longer then the ones they killed/murdered.

To Get Sexiest ingeries Store In Bradenton Click On The Link

To Get Sexiest ingeries Store In Sarasota Click On The Link

If you are looking for sex toys bradenton click on the link.

To get pleasure toys toys sarasota

To get pleasure toys in sarasota

To get pleasure toys in Tampa