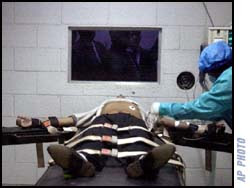 It must have seemed like a scene out of a third-world torture chamber, or a nightmare.

A man was strapped to a gurney, with needles injecting caustic chemicals into the flesh of both arms. Needles meant to be inserted into veins had missed, a mistake that would raise foot-long blisters on the condemned man's arms. Witnesses say he twisted and appeared to be gasping for air -- a reaction that one expert anesthesiologist says might have indicated that the man felt as though he were suffocating.

The sadistic scene played out for more than half an hour, as appalled witnesses, including members of the man's family, looked on.

When it was all over, the state of Florida had accomplished its objective: Angel Nieves Diaz was dead, executed for the murder of a bar manager nearly 27 years ago. But at what cost?

Many Floridians don't want to ask themselves that question. So long as executions take place away from their sight, they don't want to think about the mechanics of state-sanctioned homicide. But when executions go horribly wrong -- as they did in Diaz's case -- it becomes much harder to look the other way.

Then-Gov. Jeb Bush appointed a commission to look into the Diaz case. Gradually, a picture of gross incompetence emerged. Poorly trained personnel were responsible for inserting intravenous lines into Diaz's arms, but they apparently poked needles through the veins. The executioner supervising the killing testified that -- by the time Diaz died -- 14 vials of various chemicals had been emptied into his flesh, and that this execution wasn't the first he'd had trouble with.

The executioner -- whose name was kept secret, even from the commission -- also admitted he'd had very little training and no medical experience. Experts testified that the four-person execution team missed several clear signs that things were going wrong.

This barbaric episode is particularly shocking because lethal injection is usually billed as the "easy" way to execute criminals: Noiseless, with no flailing or burning flesh. But even when things go correctly, some experts believe the relative calm of a lethal-injection scene often hides a torturous, agonizing death.

Florida, like most states, uses three chemicals: an anesthetic to render the condemned unconscious, followed by a paralytic and a poison that stops the heart. But a study of 49 lethal injections published two years ago in the leading British medical journal, The Lancet, found that in 43 cases, the level of anesthetic in the dead men's bloodstreams fell below the amount required to cause unconsciousness. In some cases, the study found, it's entirely possible that the condemned man was awake and aware -- but unable to move -- while the caustic chemicals flooded his veins.

There's no compelling rationale behind this cruel and unusual punishment. States that apply the death penalty see no benefit in lower murder rates. The death penalty is applied so randomly that one Florida Supreme Court justice referred to it as "lightning striking." And as scientific evidence of innocence frees more people each year from Death Row, the doubt grows about using such an irrevocable means of punishment in such a deeply flawed system.

The commission's decision should be easy. Lethal injection doesn't work for Florida, any more than the other methods it tried in the past.

Posted by Turid Sandberg Ihle at 03:41

How many people have they found to be Not Guilty after the Sentence has been Carried Out.We cant bring them Back ,Why is there More Negro,s in Prison than White ??
Stop Legal Executions NOW ??
lET ME KNOW WHAT YOU Think ??
lauriereynolds2@bigpond.com Australia .