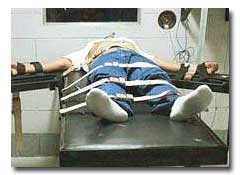 TAMPA — A Florida inmate wasn't properly sedated and could have felt like he was suffocating in a botched execution last year, a medical expert told the state's lethal injection commission Monday.

"That is a classic sign — that fish out of water look — of a person who is partially paralyzed who is struggling to gasp for breath," he said.

Diaz's Dec. 13 execution took about 20 minutes longer than the typical execution and required a rare second round of lethal chemicals. Then-Gov. Jeb Bush subsequently halted all executions and created the 11-member commission to investigate.

Monday's hearing included testimony by Alachua County Medical Examiner Dr. William Hamilton, who conducted Diaz's autopsy. He said the autopsy revealed that Diaz had a heart condition that would have caused lethal drugs to kill him faster.

But Hamilton said IV lines went completely through veins in both of Diaz's arms. The lethal drugs were consequently distributed into Diaz's tissues, he said, causing the inmate to more slowly fall unconscious and die.

"None of the materials injected went to the right place," he said.

After the execution, Hamilton said, pockets of chemicals about a foot long — essentially large blisters — formed on both Diaz's arms. He said one of the chemicals used in the process is known for its caustic effect.

But he declined to say whether he believed Diaz felt pain.

Heath, who has testified in challenges to lethal injection across the country, also stopped short of saying whether he believed Diaz likely suffered in the execution.

But he was highly critical of the execution team's decision-making after the first IV line failed to work. Switching to a backup line before a sedative took effect could have caused Diaz to feel the effects of the final two drugs, Heath said.

"They did exactly the wrong thing," he said.

Florida's execution procedure is similar to the method used in the 36 other states with lethal injection. The inmate is first injected with sodium pentothal to render them unconscious, followed by pancuronium bromide to paralyze the muscles. Potassium chloride is then injected to stop the inmate's heart.

Heath questioned the kinds of drugs used and the way they're administered. Even veterinarians don't used the paralytic drug when euthanizing animals because it masks whether the sedative worked, he said.

He also questioned whether medically trained and qualified individuals were inserting and monitoring IV lines. But he said getting medical professionals to improve executions could be difficult.

"Many people would not be comfortable with injecting drugs into a defenseless human being," he said.

State Sen. Victor Crist, R-Tampa, and other commission members challenged parts of Heath's testimony. Crist, who helped write legislation implementing lethal injection in Florida, called for an expert witness who has testified on behalf of states defending the death penalty to testify at a future hearing.

The commission is scheduled to issue a bare-bones draft this week and a more complete report with recommendations March 1. It will meet again at least one more time, next Monday.

Hearings to date have been held in front of small crowds comprised mostly of death-penalty opponents and attorneys. While medical experts and a death-penalty attorney have testified to problems in the Diaz execution, Florida Department of Corrections officials have said they saw nothing unusual in the procedure.

Monday's hearing featured the testimony of Brenda Whitehead, a corrections employee who witnessed the execution. She said Diaz barely moved during the procedure.

Todd Doss, an attorney who represents Death Row inmates, said commission members failed to question the contradiction. Medical experts have painted a picture of events that conflicts with claims that nothing unusual happened, he said.

"I think you saw the bias of the commission coming out today," he said.