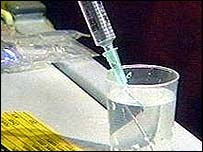 TAMPA, Fla. -- Executioners ignored clear signs something was wrong as they administered drugs to a convicted killer who took twice the normal time to die and had chemical burns in his arms, an expert told a panel reviewing Florida's lethal injection procedures Monday. Dr. Denise Clark, a physician from Orlando who specializes in vein therapy, testified the executioners who reported trouble pushing a deadly chemical mix into the veins of Angel Nieves Diaz on Dec. 13 should have known their intravenous lines were not properly inserted.

"You would know right away. You would see there is a problem," Clark told the panel Monday. "It shouldn't be difficult. If it is in the proper place, it shouldn't require a lot of force."

Diaz's execution took 34 minutes -- twice as long as usual -- and required a rare second dose of lethal chemicals because the needles were incorrectly inserted through his veins and into the flesh in his arms, a medical examiner reported. An autopsy found chemical burns in both his arms, and some experts said in interviews that Diaz probably suffered excruciating pain. "It seemed to be a clearly diagnosable problem," said panel member Rodney Doss, who is also the director of victim's service for the Florida Attorney General's Office. Testimony from members of the execution team was delayed Monday because of technical difficulties with a telephone device to disguise their voices. They will testify Friday. Prison officials last week told the panel the intravenous lines appeared to be inserted correctly and the execution went normally except for the length of time it took Diaz to die. But a Department of Corrections review found the four-person execution team deviated from established procedure by continuing the execution after noticing problems with the first injection site. They are supposed to stop and check the site, the report said. After the botched execution, then-Gov. Jeb Bush created the panel to examine whether improvements can be made to the way lethal injections are administered. Executions in Florida have been halted until the panel releases its report, which is due to be sent to new Gov. Charlie Crist by March 1. Diaz, 55, was sentenced to death for killing a Miami topless-bar manager 27 years ago. He proclaimed his innocence to the end. Death penalty opponents have seized on the Diaz execution to bolster their claim that Florida's lethal injection procedure violates the U.S. Constitution's prohibition against cruel and unusual punishment.
Previous Stories:
Posted by sisselnor at 06:12