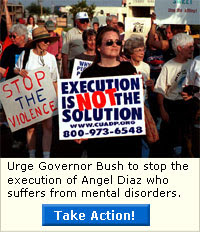 The Governor’s Commission on the Administration of Lethal Injection meets from 10 a.m. to 3 p.m. at the Tampa Airport Marriott.

It is the second meeting of the group since Gov. Jeb Bush called a temporary halt to executions following the Dec. 13 botched execution of Angel Nieves Diaz. It took nearly a half-hour, twice the usual time, for Diaz to die.

An autopsy showed the needles used in the execution pushed through his veins and delivered the deadly cocktail of drugs into his soft tissue, slowing their absorption and possibly causing pain.

Commissioners must meet at least three times before issuing their recommendations.
Posted by sisselnor at 07:55