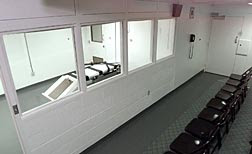 Feb. 2 (Bloomberg) -- Doctors who aid in executions by injecting convicts with deadly drugs betray the core values of medicine, an editorial in The Lancet medical journal said.

``Lethal injection is a perversion of healing,'' Leonidas Koniaris and fellow researchers of the University of Miami wrote in the editorial.

A series of botched executions in California recently led U.S. District Court Judge Jeremy Fogel to conclude that the state's implementation of lethal injection is broken and demanded that the government review the process. Other states, including Florida, are also reviewing their execution protocols. These reviews imply that medical and scientific experts should evaluate and perfect executions, the article said.

Appropriating doctors' knowledge ``to kill is an appalling betrayal of the core values of medical research,'' the authors said.

Amnesty International says 128 countries have abolished the death penalty in law or practice, while 22 countries are known to have executed prisoners in 2005. Of those executions, 94 percent occurred in China, Iran, Saudi Arabia and the U.S.

To contact the reporter on this story: Eva von Schaper in Munich at evonschaper@bloomberg.net .

Medical groups cite that there is an ethical conflict for participation in the lethal injection process, because medical professionals have a requirement to do no harm.

Physicians are often part of double or triple blind studies where there is hope that the tested drugs may, someday, prove beneficial. The physicians and other researchers know that many patients, taking placebos or less effective drugs, will suffer more additional harm or death because they are not taking the subject drug or that the subject drug will actually harm or kill more patients than the placebo of other drugs used in the study.

They knowing harm individual patients, in direct contradiction to their "do no harm" oath.

For the greater good, they sacrifice innocent, willing and brave patients.

Note, that the willing is irrelevant, from an ethical standpoint. "Do no harm" is "do no harm". Physicians knowingly make exceptions to their do no harm requirement, every day, within their profession, where that code applies.

Justice, deterrence, retribution, just punishments, upholding the social contract, saving innocent life, etc.,  are all recognized as aspects of the death penalty, all dealing with the greater good.

Are murderers on death row willing participants? They willingly committed the crime and , therefore, willingly exposed themselves to the social contract of that jurisdiction.

Lethal injection is not a medical procedure. It is a criminal justice sanction authorized by law. Therefore, there should be no ethical conflict with medical codes of conduct.

In every state, there are hundreds or thousands of people trained for IV application of drugs or the taking of blood.  Sadly, even hard core drug addicts are proficient in IV application.

It appears that some 500-1000 innocent patients die, every year, in the US, due to some type of medical misadventure, with anesthesia. (1)

I am unaware of evidence that shows criminal justice professionals are more likely to commit some error in the lethal injection process, than are medical professionals in IV application. Furthermore, even with errors in lethal injection, those cases resulted in the death of the inmate - the intended outcome for the guilty murderer. In the errors of medical professionals, we are speaking of death or other harm to innocent patients - the opposite of the intended outcome.

originally written May, 2005. Updated as merited.

Mr. Sharp has appeared on ABC, BBC, CBS, CNN, C-SPAN, FOX, NBC, NPR, PBS and many other TV and radio networks, on such programs as Nightline, The News Hour with Jim Lehrer, The O'Reilly Factor, etc., has been quoted in newspapers throughout the world and is a published author.

A former opponent of capital punishment, he has written and granted interviews about, testified on and debated the subject of the death penalty, extensively and internationally.

Permission for distribution of this document is approved as long as it is distributed in its entirety, without changes, inclusive of this statement.