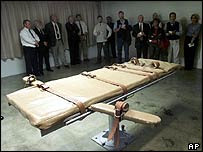 Missouri officials are headed for a showdown with a federal judge after informing him that the state cannot comply with a key part of his order directing the state to change its lethal injection execution procedures.

The clash in Missouri raises two thorny questions about capital punishment that are becoming increasingly significant -- one concerning judicial oversight, the other the role of the medical community.

On June 26, U.S. District Judge Fernando J. Gaitan Jr. said Missouri's current procedure created an unnecessary risk that an inmate could be subjected to "unconstitutional pain and suffering when the lethal injection drugs are administered," thus violating the 8th Amendment's prohibition of cruel and unusual punishment.

Gaitan, who was appointed by President George H.W. Bush, told state officials that, among other things, a board-certified anesthesiologist had to ensure that inmates were sedated enough during execution that they would not feel unnecessary pain.