Board to study death penalty 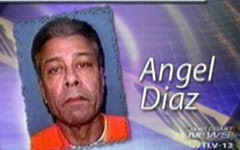 An 11-member commission is taking shape in Tallahassee to study how the state conducts executions, after the controversial lethal injection of Miami killer Angel Diaz on Dec. 13.

Gov. Jeb Bush has also suspended the state's execution process, after two days of reports about the prolonged execution and chemical burns left on Diaz's arms. Bush's order creating the commission states it must meet three times before delivering its report on March 1.

But even before the commission is officially created, at least two legislators with seats on criminal justice committees say they doubt Florida will change its process of executions. However, Sen. Nancy Argenziano and Rep. Mark Mahon said there appears to be room for improvement in how that process is carried out. Both also said the death penalty is popular among their constituents.

"We don't need to reconsider the procedure," said Mahon, R-Jacksonville. "But we probably should reconsider training and how this is done, considering that these are being done in the name of the state and the people."

Argenziano, R-Dunnellon, who once worked in a hospital's hematology department, said, "Unfortunately, there's always going to be human error. I know a little about this, and I could tell they either punctured or missed a vein. These things do occur."

Diaz, 55, was actually given two doses of the drugs yet still survived for 34 minutes - twice the usual amount of time.

Nik Gravenstein, chairman of the anesthesiology department at the University of Florida, said the state should probably improve the training of the execution teams. But like Argenziano, he said it will be difficult to foolproof the process.

"Unfortunately, it's not set up to be highly reliable and clinical," Gravenstein said. "You can have a problem with mixing dosages. Or a problem in tubing. Even with this being supposedly the most humane method of execution, clearly nobody has come up with the ideal way to do this."

Bush's order carefully distinguishes that the commission's task is only to improve the lethal injection process, not consider changing it.

Still, the order puts defense attorneys and death penalty opponents one step closer to validating decades' worth of claims that lethal injection is a "cruel and unusual punishment" - a violation of the U.S. Constitution's Eighth Amendment. The state has already discarded the electric chair as a means of execution, after two prisoners caught fire and one received a severe nosebleed in past years. In January 2000, legislators approved lethal injection in the state, believing it to be more humane and therefore less subject to controversy or litigation.

Yet claims have persisted that lethal injection is also unconstitutional. In September, inmate Clarence Hill was executed without receiving a hearing on such a claim.

The commission and the moratorium are unlikely to sway those such as Mark Elliott, spokesman for Floridians For Alternatives To The Death Penalty. Elliott said the commission's work would be fruitless because lethal injection and the Death Row process in general would still be open to criticism.

"There is no humane way to commit an inhumane deed," Elliott said. "The same system that botched this execution has wrongfully convicted and sent so many other people to Death Row. This is the visible tip of an iceberg of a well-documented, broken system."

Bush signed 21 death warrants during his eight-year tenure, the highest total of any governor since the state reinstated the death penalty in 1976. Gov.-elect Charlie Crist has pledged to continue the execution moratorium.