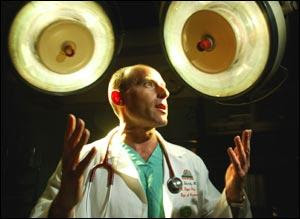 Authors' reply
Teresa A Zimmers a, David A Lubarsky a, Jonathan P Sheldon b and Leonidas G Koniaris a
Jonathan Groner and Mark Heath and colleagues mainly cast doubt on one aspect of our report—ie, the accuracy of our finding of low post-mortem concentrations of thiopental in blood. Their concerns are unfounded.
Both Groner and Heath and colleagues claim that our unpublished analysis of time to sampling versus thiopental was flawed. In general, states perform executions in the evening, and autopsies are done the next morning, accounting for the clustering of data around 12 h. In our initial submission, we did estimate time to collection for certain North Carolina samples and all eight Georgia samples, but have since received precise times from death to autopsy, plotted in the figure (upper panel). With or without these revised data or the time points contended by Heath and colleagues (circled), no significant relation can be elucidated (Pearson's correlation p=0·56, Spearman's p=0·11), confirming our previous statement that concentrations in blood did not fall with increased time between execution and blood sample collection. We neither retract any data nor alter any of our conclusions.

Heath and colleagues characterise data from Oklahoma executions as showing “a rapid and time-dependent decline in thiopental concentrations”. The Oklahoma Office of the Chief Medical Examiner provided us with investigative reports of 53 of the 56 executions done from 2000 to 2004. The 18 executions in which blood was collected within 100 min of death were done in 2001 and 2002. If thiopental were to undergo “passive diffusion” along a concentration gradient from blood to tissue, a progressive decline in concentrations in blood might be seen during this initial time period. Analysis of all 18 samples taken in the first 100 min shows no significant linear or exponential relation (Pearson r=−0·29, p=0·25; Spearman r=−0·04, p=0·89) (figure, lower panel).
A truly rigorous analysis of post-mortem thiopental pharmacodynamics would require multiple, timed samples of blood and tissues taken from individual executions, before and after death. No such data were available and so we made no claims about post-mortem thiopental redistribution in our article, but rather used the individual levels as surrogate measures of levels in life.
Heath and colleagues and Groner misrepresent not only the unpublished data, but also the existing scientific literature. Thiopental does indeed rapidly distribute from blood to tissues in life.1 In terms of post-mortem redistribution, however, Heath and colleagues and Groner have the concept entirely backwards. After death, concentrations of thiopental in blood have been shown to increase (not decrease) in a similar way to virtually all other drugs examined; the only exception described by Pounder is an inhaled solvent, toluene.2 In one of several reports describing thiopental concentrations before and after death, blood thiopental rose from 2·48 mg/L in life to 5·94 mg/L 4 h after death.3 Furthermore, post-mortem cardiac/femoral blood thiopental ratios measured 1–1·9 in one study4 whereas cardiac/aortic blood thiopental ranged from 5·2 mg/L to 19 mg/L and femoral from <2·5>2 Thus thiopental, a lipophilic, organic acid of moderate volume of distribution, is comparable to other barbiturates known to concentrate in solid organs during life, thereby providing a gradient for passive diffusion back into the blood after death.3 These results suggest that post-mortem concentrations of thiopental in blood, including those taken after execution, might actually overestimate concentrations in life.
It is perilous for Heath and colleagues and Groner to extrapolate from clinical experience to lethal injection. No anaesthesiologist practices bolus dosing of thiopental in potentially sedative-hypnotic, resistant, otherwise healthy, unpremedicated, profoundly hyperadrenergic individuals anticipating a peculiarly painful and public death. Modelling thiopental efficacy and pharmacodynamics in executions is further compounded by the profound physiological derangements associated with pancuronium and potassium administration.
Our evidence clearly indicates the potential for awareness during the unnecessarily complicated and error-prone process of lethal injection. It remains morally incumbent on American jurisdictions to demonstrate and document that inmates are not suffering. Until they do so, we stand by our contention that executions by lethal injection should be halted.
JPS practices capital post-conviction defence. Subsequent to our original publication, DAL provided paid expert testimony in a Missouri case regarding lethal injection.
Neither of the other authors has any conflict of interest.