Dr. Nik Gravenstein, professor and chairman of anesthesiology at the University of Florida 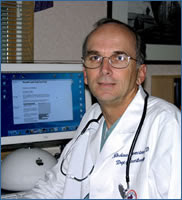 Dr. Nik Gravenstein, professor and chairman of anesthesiology at the University of Florida, said it is impossible to say how much pain the level of chemicals injected into condemned inmates causes because they can't be interviewed. But patients who have received lower levels of the chemicals for various treatments "describe this as being painful."


Gravenstein said it can be difficult to get IV needles in their proper place. In a hospital setting, it takes on average 1.6 tries to successfully place the IV.

"The whole process has a lot of opportunity not to go as intended," he said.

He indicated someone should have realized what was happening.

"To have given somebody many times what is necessary and then to give them many more times again, it doesn't pass what one might call the 'red face test.' It just doesn't make sense. You have to be suspicious that something's not right," Gravenstein said.
Posted by sisselnor at 06:41